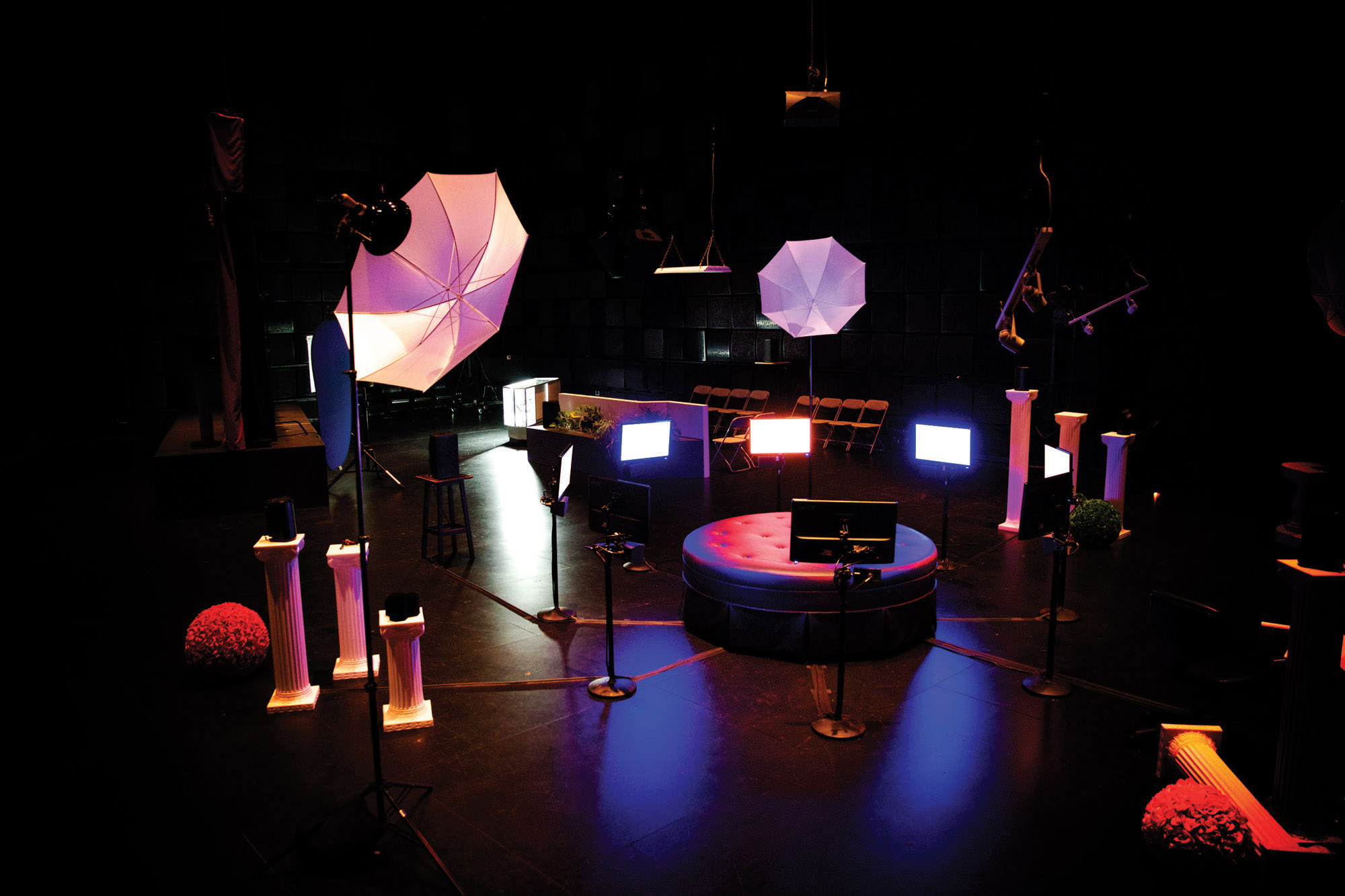 ,000, tracks the history of the Canadian city of New Westminster, which lies on the periphery of Vancouver, alongside biographical details of its residents and the urban landscape that they inhabit. A former provincial capital founded by the United Kingdom in response to fears of an American invasion, New Westminster’s past is visible today only in the crumbling architecture, condominium marketing campaigns, community festivals, and grand landscaping. Its last economic lifeline comes from irregular use as a Hollywood film set, transformed for the screen into gritty industrial hub, a thriving west coast city, or a model of 1950s America. As a long-time resident of this “Hollywood North,” the aspiring actress Bijou Steal supplements her work by moonlighting as a dominatrix, producing hundreds of fetish videos for online clients.

Narratively approached as an interwoven structure of the different characters’ views and interpretations, ,000, was composed by superimposing the structural logic of a crossword puzzle onto the city grid. Framed by the narrator and Paul Kajander’s score, Pauwels choreographs visual and auditory cues to guide the audience through a story whose differing associations and rapidly shifting references challenge viewers to assemble their own interpretations.

Isabelle Pauwels was born in Kortrijk, Belgium, and lives and works in New Westminster, BC. She received a BFA from Emily Carr Institute of Art and Design in 2001, and an MFA from the School of the Art Institute of Chicago in 2006. Working primarily in video, Pauwels’ blend of performance and documentary realism highlights the fraught relationship between narrative conventions and everyday social interaction. Focusing on the possibilities of non-linear editing, her video installations reconfigure popular genres such as the sitcom, the home movie, and the documentary. Recent exhibitions include the Power Plant, Toronto; the Western Front, Vancouver; National Gallery of Canada, Ontario, and the Art Gallery of Nova Scotia. Pauwels is represented by Catriona Jeffries Gallery.

Paul Kajander is a Canadian artist based in Seoul, South Korea. His practice encompasses video, sound, performance, installation, photography and drawing. Kajander’s recent works have been shown in various exhibition contexts (including the Daniel Faria Gallery; Toronto, the Seoul Museum of Art; Seoul, The Real DMZ Project; Cheorwon-gun, and ArtSonje Center; Seoul) and appeared in screenings, film festivals and publications. He has participated in residency programs at the Museum of Modern and Contemporary Art’s Changdong International Studio Residency; Seoul, The Guesthaus Residency; Los Angeles, The Banff Centre; Alberta and “Rehearsal Research”; a residency partnership between the Scotiabank Dance Centre & Western Front Artist Run Centre; Vancouver. Kajander has been releasing independently recorded music projects on compact disc in various collaborations since 2001. His most recent recording project was released in 2014 under the moniker “Active Pass” and features 14 songs that combine electro-acoustic and popular music approaches to recorded sound.

Commissioned by EMPAC with additional support from the British Columbia Arts Council.