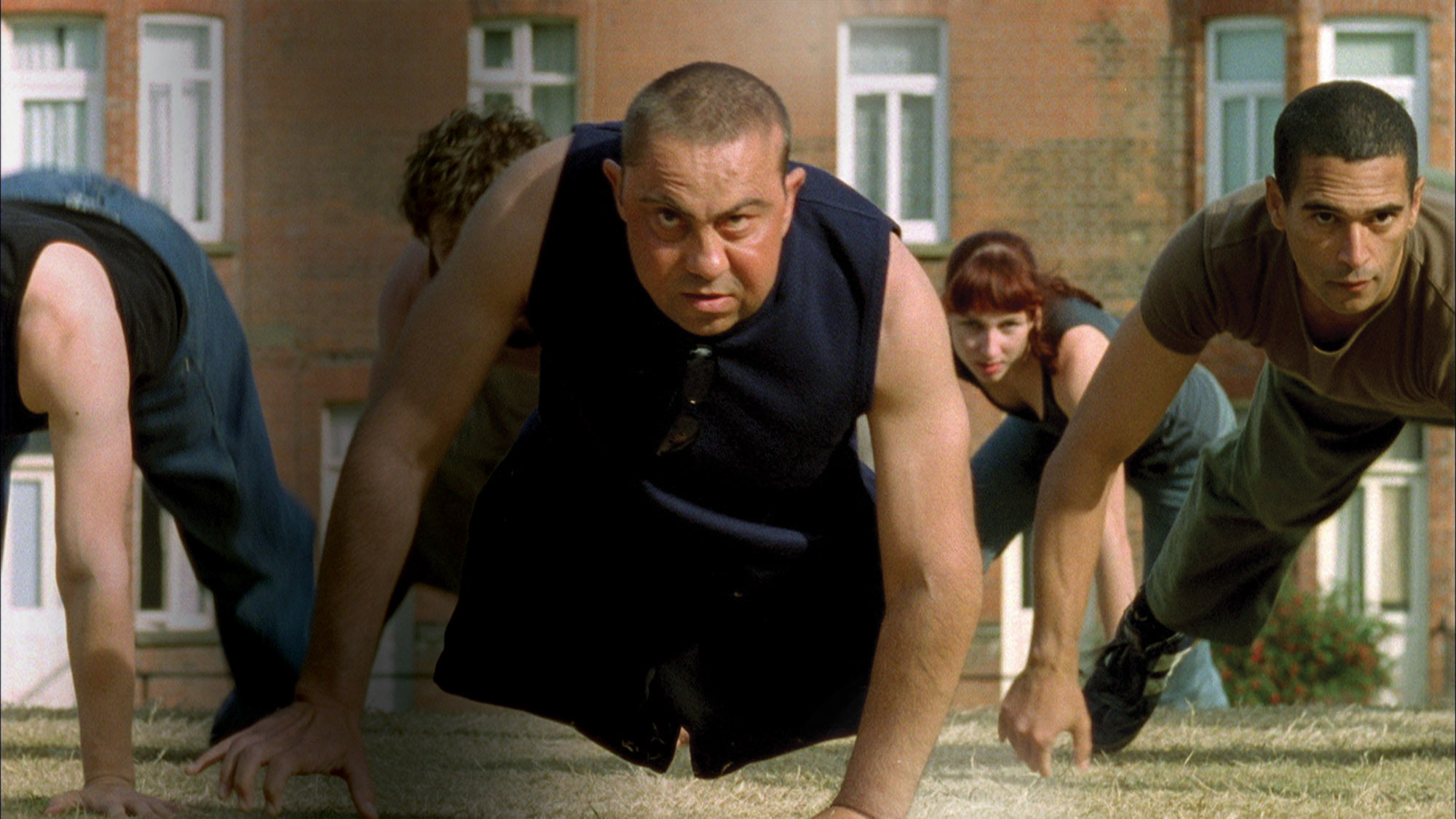 DANCE MOViES An ongoing series of international dance films and experimental videos made by contemporary dancers- not MTV, not Swan Lake, not Fred Astaire - but physical power and tender movements, roaming, dancing and acting out in the most unlikely places... DANCE MOViES 2 presents short films made by dancers and directors who investigate the ongoing search for love and logic in human affairs, often with a strong eye for the absurd. a bar a peepshow booth a bathtub ...Intimate, moving, funny, shocking. Be curious.

2002, 4', (Canada) Written and directed by Robert Deleskie Choreographed and performed by David Danzon and Sylvie Bouchard Featuring the actors Joe Gladman and Katherine Bignall Produced with the support of Bravo!FACT (Foundation to Assist Canadian Talent) In this comical and absurdist take on a penny-arcade peep show, a disgruntled couple pays to watch a bizarre courtship dance between a man and woman clad in sticky, black, rubber body-suits. To the fascination of the watching pair, what begins as tentative touches evolves into a cheeky game of slaps, as the performers get more intimate...

Left or Right for Love?

2002, 6', (UK) Directed by Magali Charrier Choreographed by Maria Lloyd Music by Lizzy Carey Performed by Maria Lloyd and Gerard Bell Produced by Magali Charrier and South East Dance UK A woman sinks into her bath of milk to emerge in a white world of fantasy, memory and chaotic thoughts. A box falls from the sky, opening to reveal a man, calm and good-humored, who watches her fly. When she comes back to reality somehow everything has changed.

2000, 9', (Netherlands) Written and directed by Annick Vroom Music by Rob Hauser Performed by Andrea Boll, Andreas Denk, Mischa van Dullemen, Klaus Jürgens Three adult siblings attend their parents' funeral and reconvene after the wake, in an empty and silent house. As the grief and shock ebb into the background, their current relationships draw into focus. Things begin to go awry. Hidden facets underlying their parents' staid appearance emerge and the house becomes inappropriately filled with music and mischief.

2003, 5', (Finland) Directed and choreographed by Saara Cantell Performed by Turo Mustakallio and Mirja Tukiainen Part of the Nordic project "Moving North - ten short dance films". A tragicomedy about a middle-aged couple who enter a photographer's studio for a portrait. He leaves them for a moment, and suddenly they have embarked on a journey of fighting and intimacy, escaping through the backdrops. As they play their time-honored games of power and affection, they expose the hidden realities of their relationship.

2001, 7', (USA) Directed by Dayna Hanson and Gaelen Hanson Choreographed by Dayna Hanson Performed by Dayna Hanson and John Dixon Produced by Agate Films A duet takes place exclusively within the decaying walls of a constricted, 4-foot-wide corridor. As light spills into the corridor from the doorways of unseen rooms, a relationship emerges between the two performers, revealed as much through their faces as through the expressive timing of their rhythmically intricate steps.

The Cost of Living