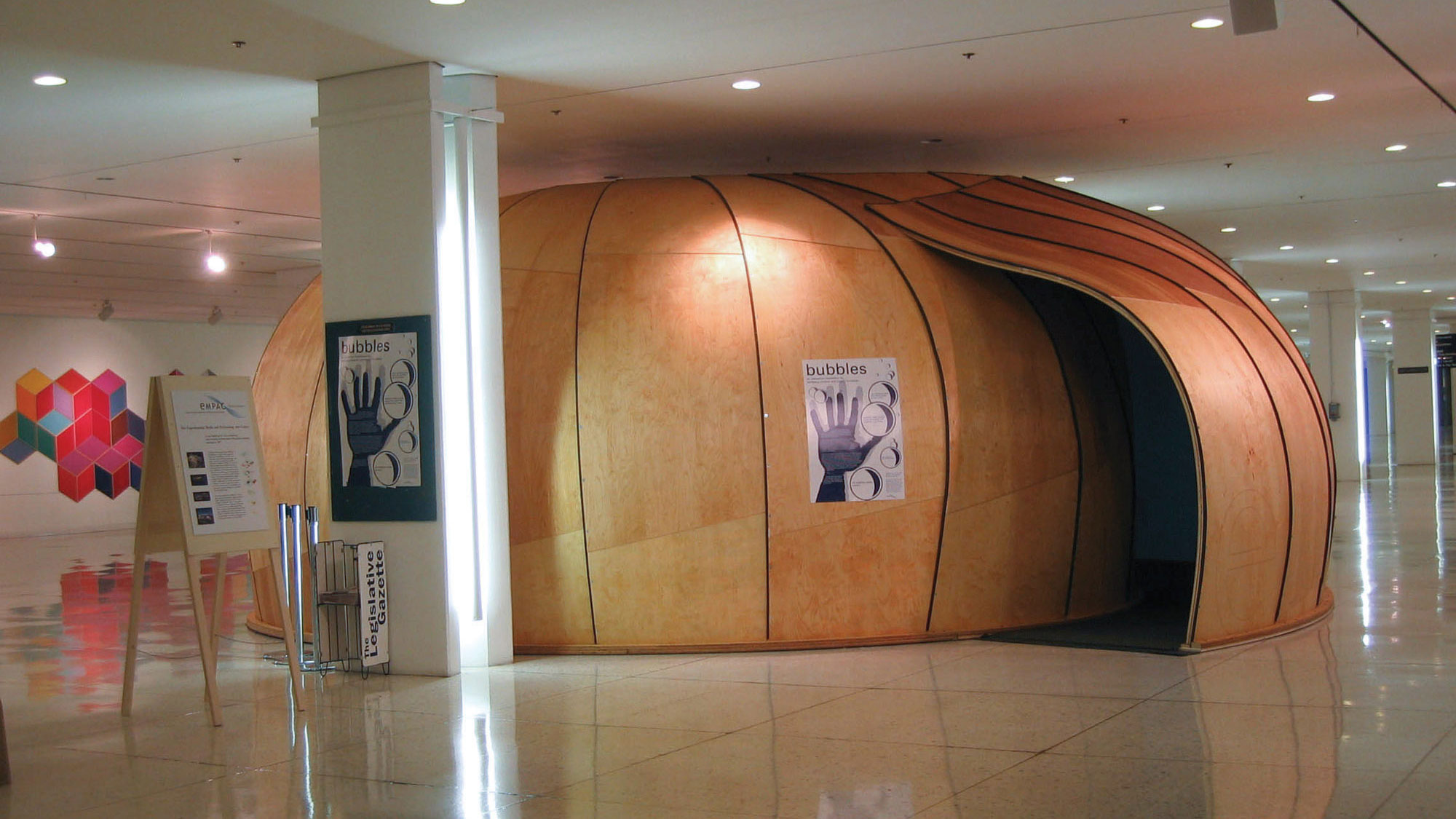 Interacting with virtual bubbles is quite simple...you just walk in front of the projectors light beam and cast your shadow onto the projection screen. The bubbles will recognize this shadow and bounce off its outlines, at the same time emitting certain sound effects. By moving your body and its resultant shadow you can play with these bubbles and the sound composition.

In a subtle manner, the work addresses the aesthetics of interaction on several levels: There is the body itself, which is usually left out when it comes to human-computer-interaction. In bubbles, it is central - users interact with the work *as* bodies, not only making themselves known as 'being there', but rather projecting their concrete body outlines onto the screen as a means of interaction. It's the body's shadow - a cultural icon in its own right - which is being used as an analog 'interfacing device' to interact with a completely digital world of its own, the simulated objects on a projection screen. The data projector, the spectator's body, and the screen itself serve as an 'analog computer' that computes the size of the shadow on the screen; the distances and spatial relationships of these elements crucially contribute to the overall experience of the work. Finally, there is the simulation algorithm itself that defines the completely artificial, two-dimensional world of the screen.

Computer simulations and shadows share the property of a certain irreality; bubblescelebrates the encounter of these two deficient reality modes: the traces of solid bodies meet the fleeting results of program code, the latter being the equivalent of an 'essence' in advanced information societies.

The work presents itself in a light, almost innocent fashion. The initial idea was to create a user tracking interface that is as simple as possible. Insofar as the bubbles react in a predictable manner when they encounter a shadow, it takes no effort for participants to observe the effects on the installation of their respective movements in real space. Ironically, while the technical requirements are in fact moderate and the setup relatively simple, bubbles also displays illusionist qualities in that the 'story' is obvious while the way it's done remains oblique. Spectators learn how to interact with the system very quickly and get involved in dancing, playing, and other kinds of odd behaviour, while the 'how'-question often remains unresolved.

In terms of computer programming, bubbles is a small complex system composed of simple autonomous objects. Each bubble is paired with a script object that defines its behaviour according to the physical laws of gravitation, acceleration and air circulation. Virtual air streams influence the bubbles' drifting movements across the projection surface. A number of the parameters needed for the bubbles' description is further used to generate the nonlinear musical structures with commands to a midi-synthesizer. To obtain the position of a shadow, the generated image is continuously compared with camera input. Where the two clearly differ, there must be a shadow: below a certain level of brightness the program performs a routine at which the bubble bounces back.

bubbles describes a playful interaction between man and machine: the participant's shadow in the light beam of the data projector creates an interface reminiscent of traditional shadow play theater. Positioned at the intersection of physicality and virtuality, bubbles displays the shadow, which is nothing but the partial absence of light, as a surprisingly dynamic force.

bubbles at the Concourse in Empire State Plaza

bubbles at the Troy Junior Museum

bubbles will be at the Junior Museum for the foreseeable future. Admission is $6 per person over 3 years of age and free for Museum Members. The Museum is located at 105 8th Street in Troy, NY, directly across from the future location of EMPAC.

Wolfgang Münch was born 1963 in Karlsruhe, Germany. He studied Fine Arts at the State Academy of Fine Arts in Stuttgart, Germany and at the University for Applied Arts in Vienna, Austria. Since 1996 he developed software for various projects of the ZKM Institute for Visual Media such as the interactive visitors information system "Panoramic Navigator" and the publication series 'Artintact' and 'Digital Arts Edition'. Lecturer for Interactive Media at Merz Academy Stuttgart [University of Applied Arts], Germany from 1997 to 2002. Artist in residence at ZKM Center for Art and Media in Karlsruhe (Germany) in 2002, The Hongkong Arts Centre in 2003 and IAMAS Institute for Advanced Media Arts and Science (Japan) in 2003. He is appointed Senior Lecturer for Media Arts at Lasalle-Sia College for the Arts (Singapore) in 2003.

Lives in Singapore and Karlsruhe, Germany.

Kiyoshi Furukawa was born 1959 in Tokyo, Japan. He studied composition with Y. Irino in Japan and with I. Yun and G. Ligeti at the Music Academy in Berlin and Hamburg. He was also a guest composer at Stanford University, USA, in 1991 and artist in residence at the ZKM Center for Art and Media Technology in Karlsruhe, Germany. He has been awarded numerous awards and scholarships including the "Ensemblia" in Moenchengladbach [1983]; the "PRISMA Prize", Hamburg [1990]; "Siemens Project Scholarship" [1992 | 1993]; the "North German Radio [NDR] Music Prize" [1994]. Since 2000 he has been assigned as an Associate Professor at the Tokyo National University of Fine Arts and Music [Faculty of Inter-Media Art].

Lives in Germany and Tokyo, Japan.