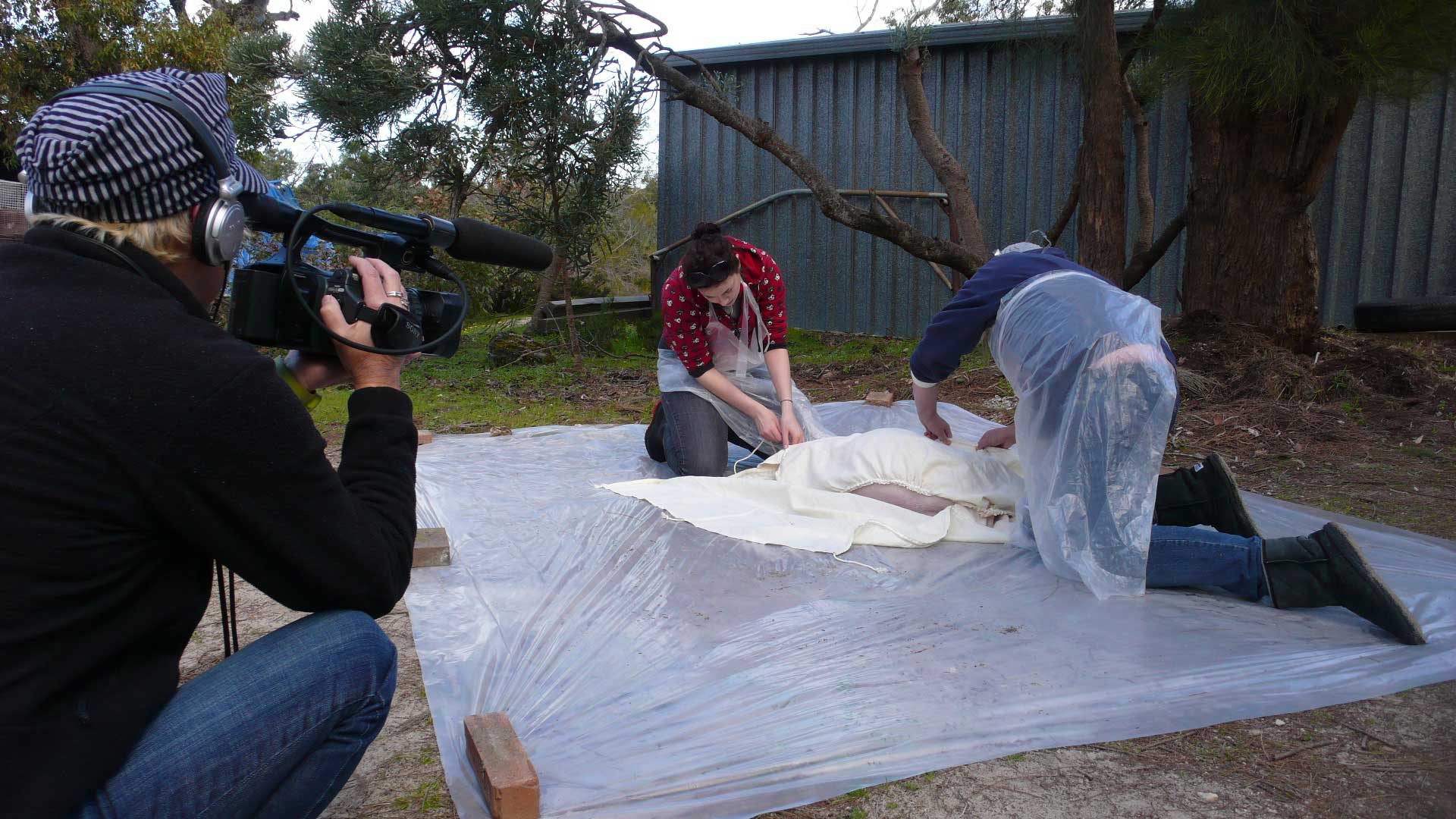 Shot in Western Australia, Death Down Under is a documentary video about death and decay, and follows the collaboration of a young fashion designer/artist, Pia Interlandi, and a mad forensic scientist, Professor Ian Dadour. An experimental research project was created between them, allowing Pia to test out her fashion-for-the-dead and Ian, an entomologist who studies human homicide, to research clothing decay on dead victims.

Pia and Ian amassed a team to wash, dress and bury 21 dead pigs on a kangaroo reserve. Then they dug up the remains to examine the decay of the ritual burial garments. Death Down Under follows the entire process from gathering the slaughtered pigs to the results in the laboratory. This video looks at our care for the dead — be they human or non-human animals. It also brings to light ideas of green burials and the ecology of death and life. How can we think through death and decay to sustain the earth's balanced environment?

Cynthia White has an MFA in Film and Television from the Academy of Art University in San Francisco. Over the past ten years she has worked on several award winning projects, both documentary and narrative. After two years of working in Santiago Chile for Productora Nueva Imagen, El Show de los Libros, she completed a short film, Sobarzo Pega Fuertewhich won best documentary at the Valdivia International Film Festival and was later broadcasted on TVN, Chile. In 2000, Cynthia joined Emmy award winner Bill Moyers’ production team in New York City and worked as an assistant producer and editor on his feature length documentary called America’s First River: Stories from the Hudson. ¶ She has produced and directed various short films and documentaries in the San Francisco area. Gordo, a film she produced, screened at US film festivals and won three separate audience awards. Bird Dog, a short film she wrote and directed, is currently in distribution through OUAT Media in Toronto, Canada and aired on Movieola The Short Film Channel. ¶ Cynthia now lives in Western Australia as a freelance filmmaker following Ship Spotters and documenting the world of BioArts for researchers at SymbioticA, University of Western Australia.

Jason Livingston is a film and video maker primarily based in NY, and currently teaches cinema at the University of Iowa. His work has received awards and been programmed at numerous festivals and venues, including Rotterdam, Cinematexas, Media City, Margaret Mead and more. Under Foot & Overstory, winner of a Jury Prize from the New York Underground Film Festival, can be rented from the Canadian Filmmakers Distribution Centre.  Some of his recent video work can be seen as part of ETC: Experimental Television Center 1969-2009, a 5-DVD collection distributed by Electronic Arts Intermix.  His work-in-progress, INTERSTATE, has received support from the New York State Council of the Arts.

Pia Interlandi is a fashion designer whose work often incorporates death as a scientific and psychological concept. She has a particular interest in textile manipulation and garment transformation, informed by her fascination with human biology and time spent in Japan under the instruction of Yoshiki Hishinuma. While studying a Bachelor of Design in Fashion, she began dissecting garments ‘autopsy-style’ and experimenting with dissolvable fabrics as a method of exploring life’s transient qualities. This became the basis of her current PhD study at Melbourne’s RMIT University, entitled [A]Dressing Death: Garments for the Grave. Part of this study has involved an in depth residency at Perth’s SymbioticA, where she researched the effects of clothing and textiles on decomposition with forensics specialist Professor Ian Dadour. Involving rigorous immersion in the rituals associated with preparing the body for interment, garments from this investigation are currently on exhibit at the London Science Museum. This doctoral study has evolved into the design of funerary garments and even the dressing of the deceased, which is now where much of Pia’s practice is now located.

Main Image: Kathy High in residence in Australia shooting Death Down Under. Photo courtesy the artist.

Death Down Under is a documentary, directed by Kathy High with Cynthia White.