"Berlin-based composer and sound artist Robert Henke, who is also one of the principal authors of Ableton Live software, provided insights into his artistic approach in two talks, and performed a multi-channel audiovisual concert together with visual artist Tarik Barri. As a child of Berlin’s 1990s club culture, Robert Henke started composing music influenced both by academic computer music and electronic dance music. He releases music and performs under the alias Monolake; teaches sound design at the Berlin University of Arts; and writes about computer-generated sound. He lives and works in Berlin.

October 6: Live. Max. Max For Live. What is it Good for? The Ableton Live software gave birth to a new way of creating and performing electronic music and became a huge success among dance music producers; but the academic music world remained skeptical, with Max/MSP considered the standard tool in academic computer music. Live and Max seem to cater to a very different audience. In this talk, Henke asked: what happens when those two worlds become more integrated?

October 6: Live Performance in the Age of Supercomputers Henke considered the question: How can we convincingly perform computer- based auditive or audiovisual art in today’s world? The possibilities for sound generation and manipulation are almost limitless; however, the interfaces, as well as our experience and practice with them, are not nearly as advanced. Robert Henke offered his theoretical ideas of performing live and contrasted them with a critical review of his own concerts. 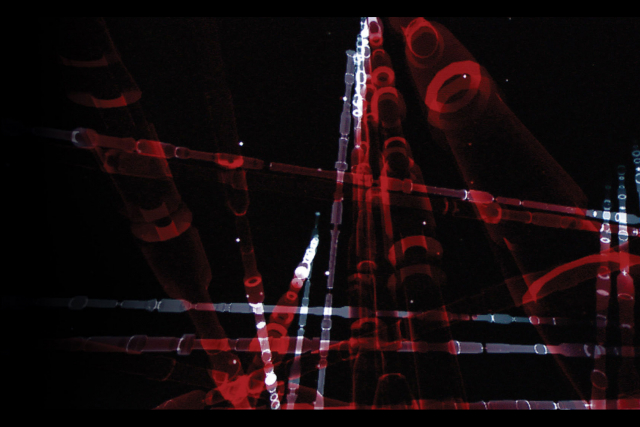 Talk
Live. Max. Max For Live. What is it Good for?
Robert Henke
Image