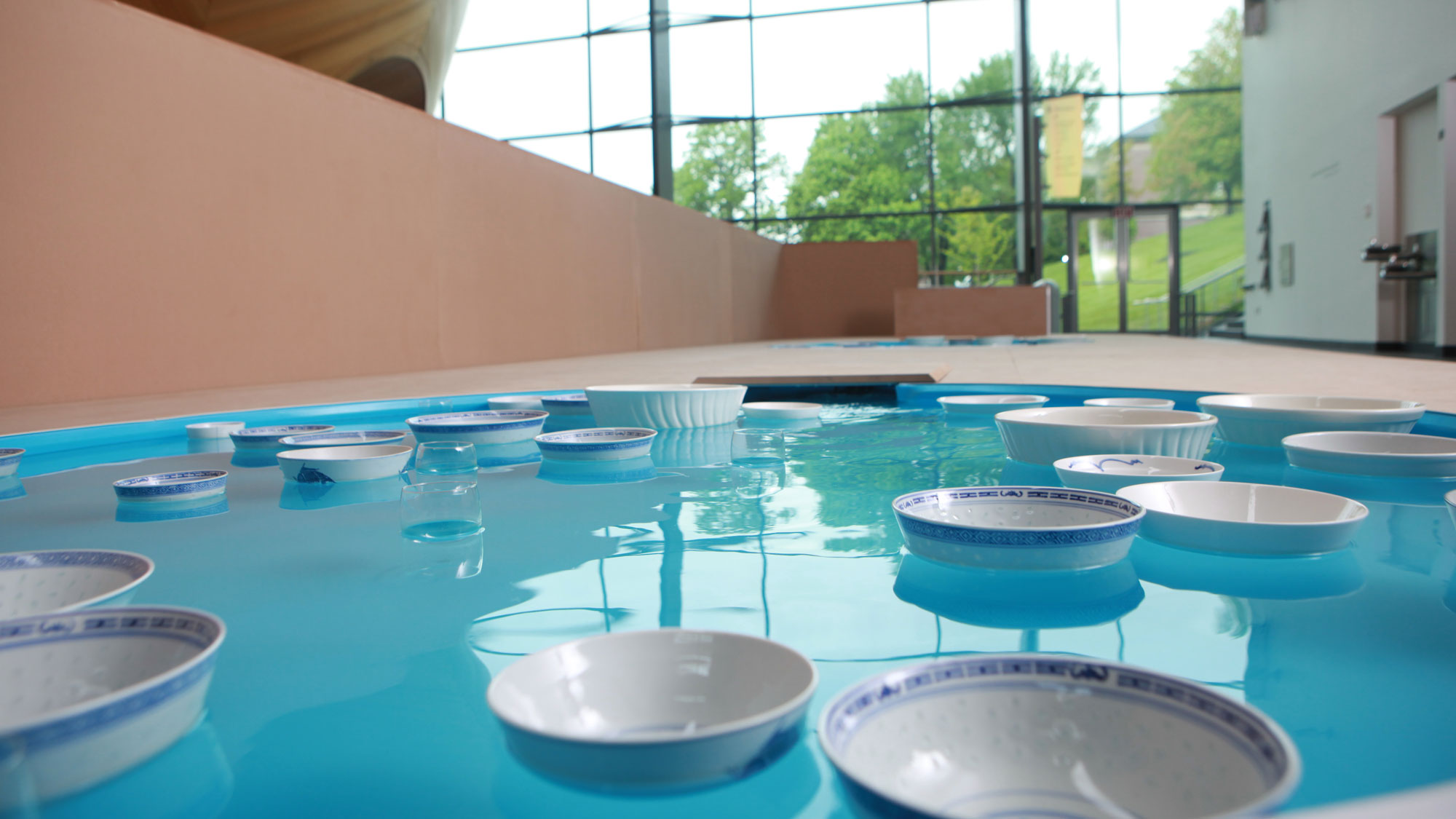 French artist Céleste Boursier-Mougenot developed two sound installations while in residence—untitled (Series #3) and index (v.4)—which were then presented as a single exhibition over three floors in EMPAC’s public spaces. Together, the pieces reflect on music composition’s relation to nature and technology as well as our perception of complexity, control, and authorship in time-based art. untitled (Series #3) was comprised of three wading pools filled with bowls and wine glasses; by calibrating the temperature of the water to increase the resonance of the floating objects, and by controlling the direction of the water flow with a small pump, ongoing, resonant collisions are created. The result is a chaotic, atmospheric music with a variety of small sounds surrounding the listener. For index (v.4) software designed by the artist was installed on computers throughout EMPAC, capturing typed letters, words, and punctuation into dynamics, pitch, and chords played by two mechanically actuated grand pianos. The real-time data stream became the chaotic generator of an ongoing score, in constant performance. Like untitled, this work conflated empirical, technological gestures with chaotic “natural” elements.

A native of France, Boursier-Mougenot’s works have been exhibited worldwide.

Nature Is Not An Algorithm

Ten years ago, I met Céleste Boursier-Mougenot at a lecture he was giving on his recent work. I caught up with him afterward, and while I don’t remember what I asked, I do remember his answer (paraphrased):

“To get real complexity-in-time, one has to let go of a piece into nature.”

This reflects powerfully on composing music, about time-based art-making in general, and about the relationships between perception, artistic actions and constructions, and the use of technology in the processes humans create for themselves as works of time-based art.

If we could agree on all the components of nature, all variables and their range of variation, it would still be impossible to come to a consensus definition for the highly interconnected system that is nature. We don’t know how it yields the results that it does, nor can we adequately model and predict even the most urgently disastrous facets of its activity. Nature is not an algorithm.

Nature is one of the most unknowable generators of time-based events. The wind blows; your recycling is scattered all over the street. It’s causal somehow, but why it happened remains mysterious. Nature acts without hesitation, appears without evidence of intention.

The complexity and diversity of these gestures can never been counted, and they go far beyond the patterns we can perceive within our limited attention span or construct over a lifetime of coloring in squares on graph paper.

Boursier-Mougenot has set technological systems to the winds of nature for years: from winches creating music from the traffic-triggered dragging of chairs across concrete (recursivity) to music from finches landing on high-gain electric guitars, accidentally shredding (from here to ear). Since 1996, his work has often involved either the translation of natural phenomena or the direct inclusion of animals as complex event generators.

The two pieces in this show elegantly combine finite technological gestures with the complexity of nature intervening.

untitled (series #3) takes the deceptively simple act of making a current in water with a small pump and turns this into the actuating energy for a very expectation-defying music. It’s not a system, but a score, the architecture for a situation that has been put into motion and left to unfold. The results come from his choice in materials: what the floating objects are made of; how many of each type there are; what size they are; if they move in stable ways or tip this way or that; how many will be in each pool; how warm the water will be and how fast the current will flow.

index (v.4) articulates the invisible labor of EMPAC through two mechanically actuated grand pianos separated by a vastness of air. Software designed by the artist is installed on computers throughout the building, capturing the invisible music of their owners’ typing. A language analysis scheme translates letters, words, punctuation, and other linguistic variables to the pianos’ “language”: dynamics, pitch, register, repetitions, silences, chords, transpositions, pedals, etc. This real-time data stream becomes the chaotic generator for an ongoing score, constantly performed. Like untitled, this work conflates empirical, technological gestures with chaotic “natural” elements. In this case, the ever-tapping actions of EMPAC employees are like the finches in his previous work—accidentally shredding.

index (v.4) for two pianos is presented at EMPAC in collaboration with superposition, Paula Cooper Gallery, and Les Pianos Pleyel.