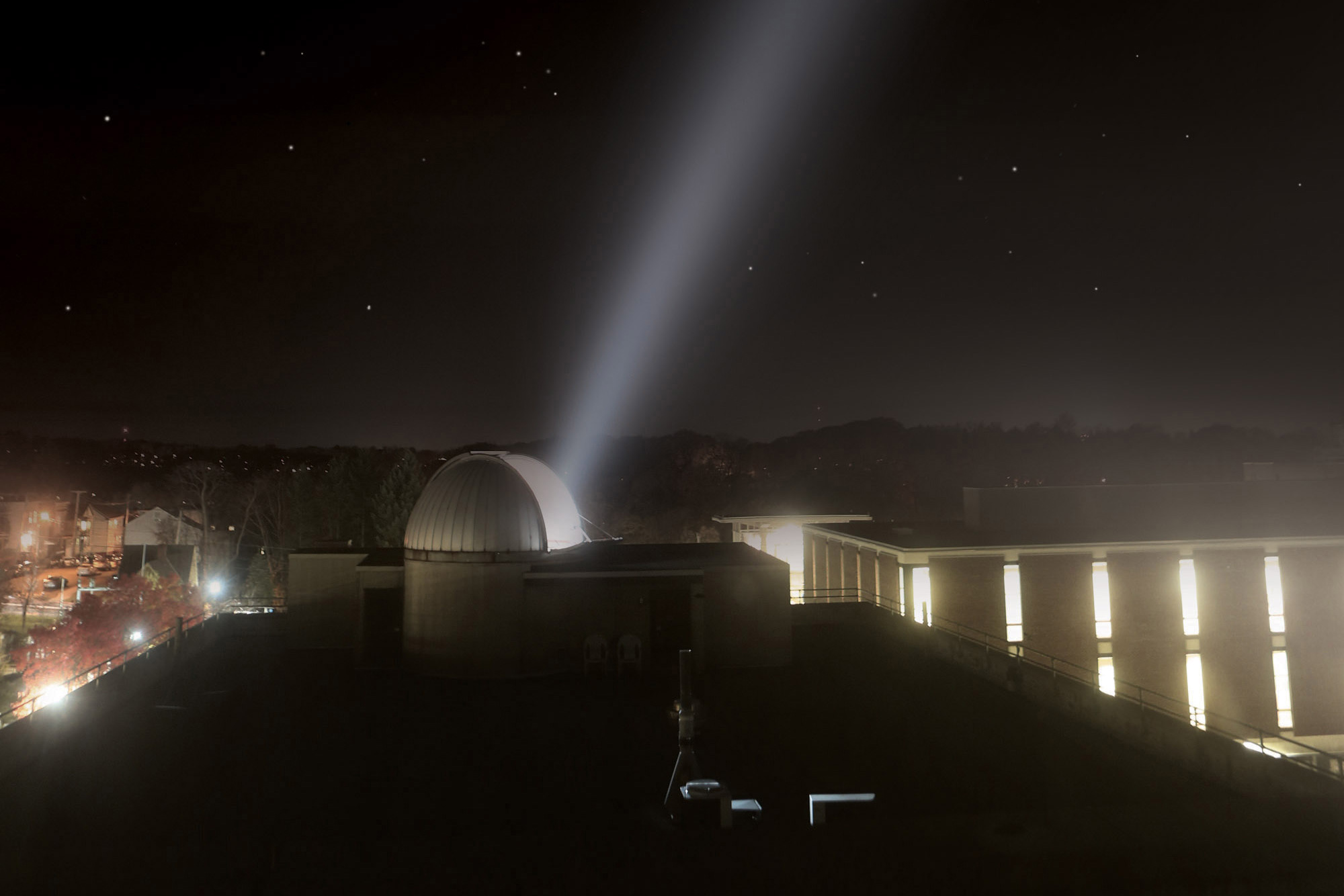 The Color Out of Space and White Museum

Rosa Barba’s two-part EMPAC commission was produced in collaboration with Rensselaer’s Hirsch Observatory and was presented on four consecutive Saturday evenings throughout March 2015. While transforming EMPAC’s 8th Street façade into an outdoor cinema that uses the solar system as source material for a speculative film, a site-specific artwork for the Hirsch Observatory connected the two buildings across campus.

The Color out of Space

A concurrent 70mm film installation at the Hirsch Observatory projected out of the dome and into the sky. Located on the roof of the Jonsson-Rowland Science Center, the observatory was built in 1942 to house a 12” equatorial reflector telescope that was designed and constructed at Rensselaer. Juxtaposed against the current 16” Boller & Chivens dome telescope from the 1960s, the film projector traces the reciprocal relationship of astronomy and cinema.

DIRECTIONS FROM EMPAC TO THE HIRSCH OBSERVATORY

From the EMPAC lobby, walk east approximately three minutes, following the paved sidewalk onto the Rensselaer campus. The south entrance to the Jonsson-Rowland science center will be on your left. An usher will escort you inside.

Rosa Barba’s publications, sculpture, and installation work are rooted in the material of cinema. In 2010, she won the Nam June Paik Award for Coro Spezzato, The Future Lasts One Day (2009). She was a resident artist at Artpace in San Antonio in 2014, Chinati Foundation in Marfa in 2013 and the Dia Art Foundation in 2008. Her work has been presented in exhibitions worldwide, including Time as Perspective (2013) at the Bergen Kunsthall; Auto Kino! (2010) at the Temporäre Kunsthalle Berlin; Making Worlds at the 53rd Venice Biennale in 2009; and Italics: Italian Art Between Tradition and Revolution, 1968–2008 (2008–09) at the Palazzo Grassi in Venice and at the Museum of Contemporary Art, Chicago.

Jan St Werner is a composer and musician based in Berlin, Germany. Aliases include Mouse on Mars (with Andi Toma), Microstoria (with Markus Popp), Von Südenfed (with Andi Toma and Mark E Smith), Lithops, Neuter River, Noisemashinetapes. He has produced numerous recordings both solo and collaboratively, including The Fiepblatter Catalogue on Thrill Jockey Records and the Mouse on Mars 21 AGAIN Project on Monkeytown Records. St Werner co-runs Sonig, an independent music label for experimental, electronic and non-genre-specific music. He has composed orchestral works for musikFabrik, Solistenensemble Kaleidoskop, and the Chicago Symphony Orchestra. St Werner’s work has recently been featured at the ICA, London; Radialsystem V, Berlin; Kunsthaus Muerz, Austria; Kunstverein Munich, and Cornerhouse Manchester.